This work by Hifa Cybe & Isabela Lauermann aims to develop the concept of necrocitizenship, in addition to demonstrating its practical feasibility and enumerating the barriers that are encountered for its effective exercise and also criticisms about necropolitics.

The strangest characteristic of unconscious processes (…), is due to their complete disregard for the reality test; they equate the reality of thought with external reality and desires with its fulfillment – with the fact – just as it happens automatically under the domain of the old pleasure principle. Hence also the difficulty in distinguishing unconscious fantasies from memories that have become unconscious (Freud, 1911/1980: 285).

However, art is reconciled with religious fetishism, specifically by objectifying and, in a way, worshiping the body image. The artist is the narcissist, whose presence is the vulnerability of the body that transitions between the banned / taboo of death, desire and transgression. “My body is the intention. My body is the event. My body is the result ”- Günter Brus 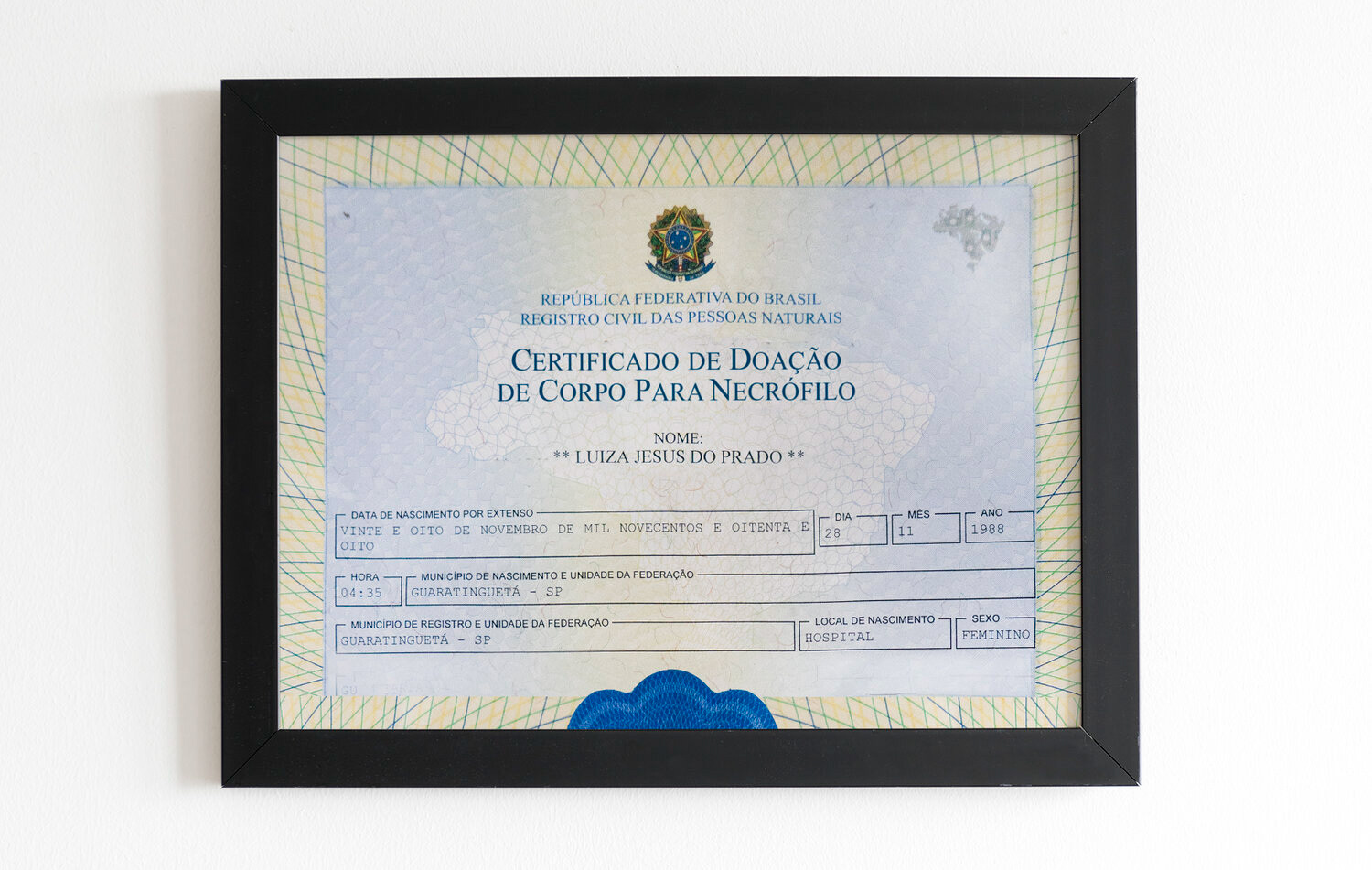 Necrophilia is then treated as questioning religious ethics and political ethics, the duality that exists between “the sacred and the profane, the divine and the human”. This perversity in conjunction with the social life of the necrophile under a judicial and social curation of the State, religiosity, specifically; monotheistic and eurocentrist religions – thus creating the optics and analogy of a Social Theater.

In current Brazilian legislation, despite advances in the field of organ donation and body donation for science, it does not give complete freedom for the individual to define the fate of his corpse in the post-mortem. The family, and the family’s desire, are superior to the individual’s own desire, since, even for the simplest things, such as organ donation, there is a need for family approval. That said, taking into account the corpse as a matter, the discussion of the dead body being owned by the individual’s family, and not by the State.

This issue becomes complicated from the moment that religious freedom is a fundamental right, confirmed in the Federal Constitution. In other words, it is perfectly possible a situation in which there is no organ donation from an individual, who expressly expressed his desire, on behalf of a family, in which, due to religious principles, he did not allow the donation to take place. Thus, it is as if this individual is obliged to follow religious standards that he does not agree with.

It is possible to draw a parallel with the issue of necrophilia. In the Penal Code, the crime of “vilifying the corpse”, which is when the honor of the corpse or his family is hurt. In this sense, if we are going to analyze the necrophilic practice as a villain, we can also analyze the situation described above as a villain. It is understood: if the practice of the necrophilic act, or even the plundering of the tombs is considered an act that hurts honor, why wouldn’t it be against the principles of the individual before dying?

Perhaps this parallel is easier to see when analyzing the opposite. Christians bury their dead aiming at the sacredness of the body, in the face of the resurrection of the flesh. Well, wouldn’t a family who donated all the organs and then cremate an individual who had these principles not be seen as sacrilegious? Wouldn’t it be hurting the honor of this corpse, since the honor also includes the intellectual attributes? What about the state that neglects lives?

What is transgression really?

Isabella Lauermann is Bachelor of Laws from the Federal University of Rio de Janeiro (UFRJ), postgraduate student in Compliance, Auditing and Controlling from the Pontifical Catholic University of Rio Grande do Sul (PUC-RS) and Master’s student in Bioethics, Applied Ethics and Collective Health by the PPGBIOS program , linked to the UFRJ. Freelance translator for the Langage Institute of Lacanian Psychoanalysis. Member of the research group Control State Racism and Coloniality (CERCO-UFRJ). Researcher in the field of Bioethics, Philosophy of Law and Philosophy and coiner of the term “Necrocitizenship”. It proposes a dialogue about alterity in the post mortem.

Hifa Cybe is a transdisciplinary artist. Hifa artistic research is about neural rescue and reprocessing of memories through art, specifically with the use of performance, noise and photography. Her work also addresses issues related to sexuality, gender and ancestry. To know more.